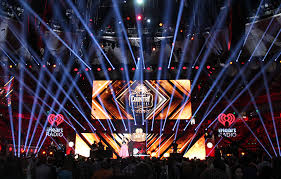 The fifth annual iHeartCountry Festival took place Saturday, May 5 at the Frank Erwin Center in Austin, TX. The show featured a superstar lineup of country artists and was broadcast on over 120 of the company’s country stations, the iHeartRadio app and streamed live on ATT.com and on the AT&T Twitter account.

For the third year, the festival began with performances in the Daytime Village, a free event that featured Luke Combs, Brett Young, Dylan Scott, Danielle Bradberry and Ben Rue. DJ Sinister spun between sets at the Village, which also featured fan zones and interactive experiences.

The Saturday night main event was hosted by Premiere-syndicated host Bobby Bones and actress Candace Cameron Rue, best known for her portrayal of D.J. Tanner on “Full House” and its reboot, “Fuller House.”

The evening was full of surprises and collaborations, including Bones joining Sugarland on stage as they performed their hit “Stuck Like Glue.” Keith Urban, who closed out the night, was joined by Maren Morris for “We Were Us.” Morris was on stage earlier in the show for a solo performance that included her hit with Zedd, “The Middle.”

Pop artist Gavin DeGraw helped out Brett Young, who said DeGraw was his inspiration to become a songwriter. “I’ve seen a lot of Gavin DeGraw shows, but tonight is the first time I get to share a stage with Mr. Gavin DeGraw,” Young told the crowd. The two performed the song “Soldier,” which was dedicated to members of the U.S. military who were in attendance.

Cole Swindell played some of his hits and later joined Luke Bryan on stage during the performance of Bryan’s song, “Roller Coaster.” Bryan himself made a cameo during Billy Currington’s set as the two sang “Good Directions,” a song Bryan co-wrote. Daytime Village performer Danielle Bradberry got some main stage time, singing with Dan + Shay on “How Not To.”